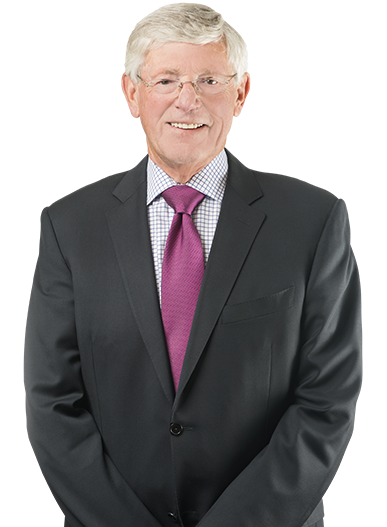 Shareholder
E-mail: whangley@hangley.com
Phone: 215.496.7001
LinkedIn Vcard Print
Among the best in the profession

Chambers USA has called Bill "a towering figure in the commercial litigation arena," "brilliantly strategic," and "creative in thinking outside the box." He has been honored in every edition of Chambers USA since its founding.

Bill has been repeatedly named one of the Top 100 Trial Lawyers in America by Benchmark Litigation.

View Link
“A superb generalist. You name it and he's probably tried it."

Bill was featured in the cover story of Pennsylvania Super Lawyers Magazine in 2012.

United States District Court
for the District of Maryland

William T. Hangley, a founder and Chair Emeritus of the firm, is one of America’s most highly decorated trial lawyers and counselors. His practice involves representations of both plaintiffs and defendants.

Benchmark Litigation names Bill one of the top 100 lawyers in the United States; Best Lawyers has named him Lawyer of the Year for “Bet the Company” litigation. Chambers USA has never left him off its list of leaders in Litigation. He has several times been a top-three vote getter in the annual Pennsylvania Super Lawyers rankings, and was recently on the cover of its annual magazine. A longtime Fellow of the American College of Trial Lawyers, he has served as the College’s Regent for Pennsylvania, New Jersey, and Delaware. He recently completed a six-year tour as a member of the United States Judicial Conference Advisory Committee on Evidence Rules (by appointment of Chief Justice John Roberts), and is currently the Liaison of the ABA Section of Litigation to the Advisory Committee on Civil Rules. He has been a member and then Chair of the Pennsylvania IOLTA Board (by appointment of Pennsylvania Chief Justice Ronald Castille), and served as Chair of the Third Circuit Lawyers Advisory Committee (by appointment of Third Circuit Chief Judge Anthony Scirica). He has been Co-Chair of the ABA Section of Litigation’s Federal Practice Task Force and a member of the Task Force on Discovery and Civil Justice, a joint project of the American College and the Institute for the Advancement of the American Legal System, which works to address the increasing inefficiency and expense of the civil justice system and the disappearance of the civil jury trial.

During the 1990s, Bill presided over jury trials as a Judge Pro Tem of the Philadelphia Court of Common Pleas, helping the Court address its then-critical case backlog. He currently serves as a Special Discovery Master for district judges in two ongoing complex civil litigations.

Beginning with its first edition, Chambers USA: America’s Leading Lawyers for Business has named Bill as one of the top Commercial Trial Lawyers in Pennsylvania.

He has been consistently recognized by The Best Lawyers in America as one of a handful of “Bet Your Company” Pennsylvania trial lawyers, and was recognized as the 2010 Philadelphia Lawyer of the Year for Bet-the-Company Litigation.

Bill is consistently named a Local Litigation Star by Benchmark: The Definitive Guide to America’s Leading Litigation Firms and Attorneys

Opinions Hidden, Citations Forbidden: Report And Recommendations Of the American College of Trial Lawyers On The Publication And Citation Of Nonbinding Federal Circuit Court Opinions, 208 F.R.D. 645 (2002)

“Teaching Through Experts: Changing the Obscure to the Obvious,” Litigation, Spring, 2001

“Direct and the Director: Writing, Staging and Telling The Story,” Litigation, Fall, 1998

“The Fourth Estate and the Second Front: Winning and Losing in the Press,” Litigation, Spring, 1997

Hangley Aronchick Ranks High in Chambers 2020
The 2020 edition of Chambers USA has been released and, once again, Hangley Aron ...
more
Calm in the Courtroom: Trial Lawyer Bill Hangley ...
“Some lawyers are confrontational...That’s not my approach.”
more
Attorneys Lead ABA Section of Litigation’s Federal ...
The 2015 Amendments to Federal Rules of Civil Procedure will usher in significan ...
more
View All News